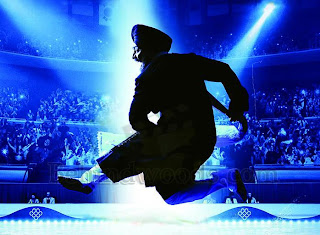 Are you sure the movie talks about Chaos theory and Butterfly Effect.

First off all ,lets talk about non linear story telling. There is no time discontinuity in the narration, the story is told pretty much in chronological order from the king era to modern day tsunami.The hardest thing about a non linear story is that it is easy to write and read, but hard to tell someone in the order it was written. As far as dasavatharm goes, you can tell it in the classical linear way.I mean you can literally start the story as "Oru oorlla Oru raja iruntharam". As far as discontinuity in space is concerned,the characters in this movie don't run parallel its just one big chase story and many insignificant characters that come for 5 mins, the story is no different than bourne identity. The characters are not well developed even to be considered as part of the story, they are pretty much nuisances in the story flow.


People are so delighted about the fact that the movie touches chaos theory.Maybe iam wrong, but i don't see it in the movie.I first came to know about chaos theory in Jurassic park.The chaos scientist jeff goldbumn, explains chaos theory to the lady in the movie.He keeps a drop of water on her hands and asks her which direction it will go, she says one direction but the water droplet goes the other way, next time he says now which direction she says the direction it went last time, but it ends up going in a different path.Then he explains her, even though the starting point is the same,the water will take different routes every time because of the perforations in her skin and hairs on her hand, which induce the change in the water's path.The smallest of change in the path will make the water take an entirely different route.

Well here is the definition of chaos theory."A systems whose state evolves with time - that may exhibit dynamics that are highly sensitive to initial conditions (popularly referred to as the butterfly effect)".what differentiates between a random set of events and a chaotic system is that the chaotic system is sensitive to its initial conditions.The theory is always tested with multiple runs on the same system and how the dynamic system changes the result every time you run it.The idea is to find a pattern , or formula for the chaotic systems behavior.To find a deterministic way to describe a dynamic model. 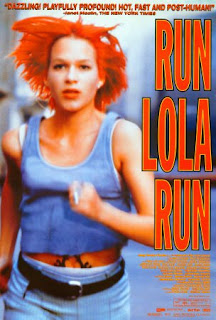 If you have to put that in a movie.We should be able to show the initial conditions ,the dynamic nature of the systems and how a small change delta results in a big difference to the result, also the underlying commonality in the chaotic system.One of the best example of the theory in movie is "Run Lola Run".The story is simple. Lola's boy friend calls her to say that he is in deep trouble, he has to give 100,000$ to a gang member or otherwise he will be killed.He also tells her that if she does not come up with the money in next 20 minutes he is going to rob a bank to pay the gangsters.Lola asks him not to do anything stupid and says she will arrange the money and meet him in 20 mins.She runs from her house to her boy friend in 20 mins.she decides to ask her banker father for help.But he does not help her and she fails. and the story ends tragically.when you think that the story has ended.It kind of resets to the point when her boy friend told her everything on the phone.the story again starts and lola runs again.This time the 20 minutes is spent on a different way to get the 100,000.Again she fails and again the movie resets to the phone call from her boyfriend and the next 20 minutes is a different way to get the money.The chaotic system every time changes the end result , but the initial conditions remain the same, the condition that she has to get the money to her boyfriend in the said time.Actually the road in which she runs , the people she comes across are almost the same in the different runs with slight variations.This is not the case in dasavatharam. Dasavatharm does not do anything intelligent like this.It just sticks to the time tested story telling formula, with references to chaos theory in the movie.

kamal's takes a different view of chaos theory, which is that all the events are related to one another and that a chain of events happen for one end result.On that case isn't it true or most of the stories/movies.Why tell an ordinary story and talk about chaos theory.I would say the biggest chaos theory story that ever been written is mahabharatha, where all the thousand branch stories are related to one another and result in one end.

A small sideline story where a character curses karna , which results in his death, which results in the triumph of arjuna and truth.So in his dasavatharam script hasn't done anything special than what was done by the guys who wrote the original dasavatharam(rama,krishna etc), guess they where the first chaos theorist.

If you want to see more chaos theory related movies checkout run lola run,frequency, Butterfly effect etc.Talking about Butterfly effect ,the Butterfly Effect that everyone talks about is the Delta change that is being introduced in the system, which cause a big difference in the end result.


First off all you should note one thing here. Kamala hassan cleverly alters the statement .Butterfly effect is widely described this way.

"Butterfly's wings might create tiny changes in the atmosphere that may ultimately alter the path of a tornado", some say it creates a tornado etc. But in dasa ,Dr.kamala Hassan says that a butterfly's wing flap can cause an Earthquake.Butterfly wing flapping changes the atmosphere and, Let's say that reverberation is exponentially increased due to various reasons and it induces a tornado. At least theoretically it sounds ok.But how can a change in the atmosphere cause an earth quake??.why did he change the theory from tornado to earth quake?The reason is simple, cause the movie ends with tsunami which was caused by an earthquake.This is kamal, the bullshit king at his best.

Let's just assume that we are just following one butterfly wing flap which caused a change in the system, the energy /change that was introduced by the flap of wings kept on increasing exponentially, and resulted in the tornado/earth quake.So the question is what is the butterfly wing flap in this movie.Is it the act of throwing the statue in the sea.On that case, there is a big logical black hole.The energy/ripple/change in the system created by the butterfly is never propagated, that is the chain of events does not pass on from from rangaraja nambi the priest to govind the biotech guy.

So if the statue fell into the sea, which results in shifting of the Teutonic plates(lets just assume), and resulted in the tsunami, then it is just rangaraja nambi , the statue and sea bed which caused everything. what are all the other nine characters in the story doing??.

If you take kamal's words in the movie, you will come to the conclusion that it is not butterfly effect that he is talking about in the movie. But that Dr.Kamala hassan the scientist has invented a new theory it is called the reverse butterfly effect or Bullshit effect.He says his story starts from an earthquake and ends in a butterfly flap.In short Kamal hassan as usual buries the audience in bullshit.By his own words there is no Butterfly effect in the movie.Wake up guys...

I saw dasa this weekend and read couple of reviews.Some of the things that i read, forced me to write a review about a movie after a long time.Iam going to do this in installments.As usual, a kamal movie comes with loads of bullshit.The pre release promotional BS and the BS that is very much part and parcel of his movie. Over the years i have come to separate the BS and core of any kamal movie.

First of all i want to talk about the Non Linearity, Chaos theory and Butterfly effect of this movie.