If you keep watching closely there will be atleast 3 or 4 news items about kamal or his family member every week. Even people like simbu were not able to generate that much news, but kamal did. Given the fact that there was no movie release from him for the past two years, it makes us wonder how this is happening. He seems to have a team of people whose only job is to promote him online. And off course his  PRO’s keep feeding one fake news after another to the online media, which never checks the source or truth of the content.

check out this one. 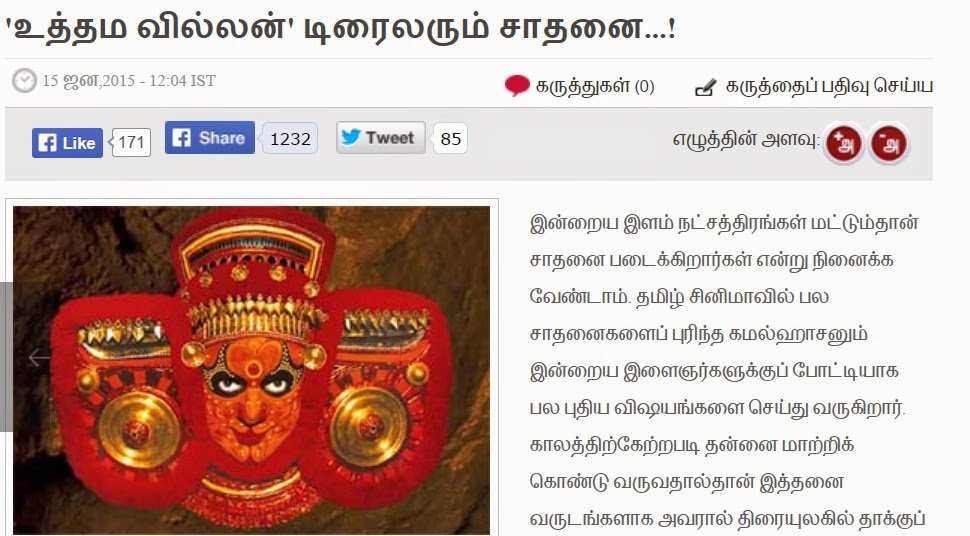 The news talks about a record that the uttama villain trailer has created. It talks about the trailer getting 21 lakh hits in 2 days. but the truth of the matter is it did not even get 4 lakh hits even after 3 weeks. The luke warm response might be one reason why the movie got postponed to april.
Here is another fake news that compares kamal with other actors. 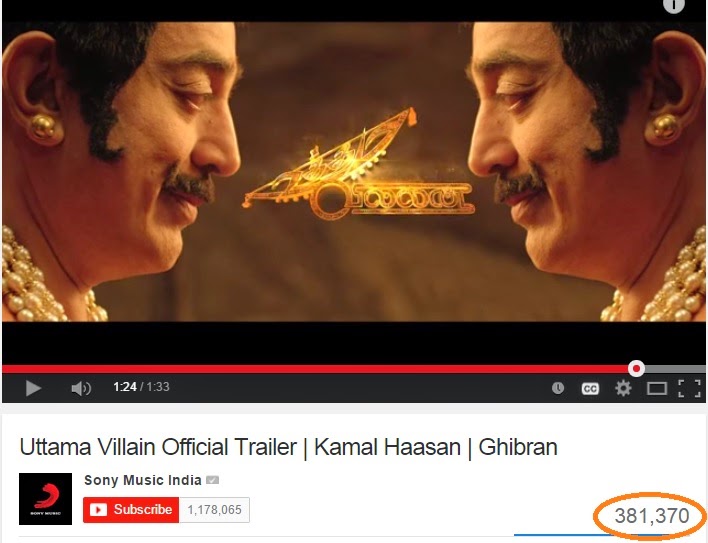 
Here is a another fake news which quotes the trailer hits as 21 lakhs when all it has done is  less than 4 lakh hits. 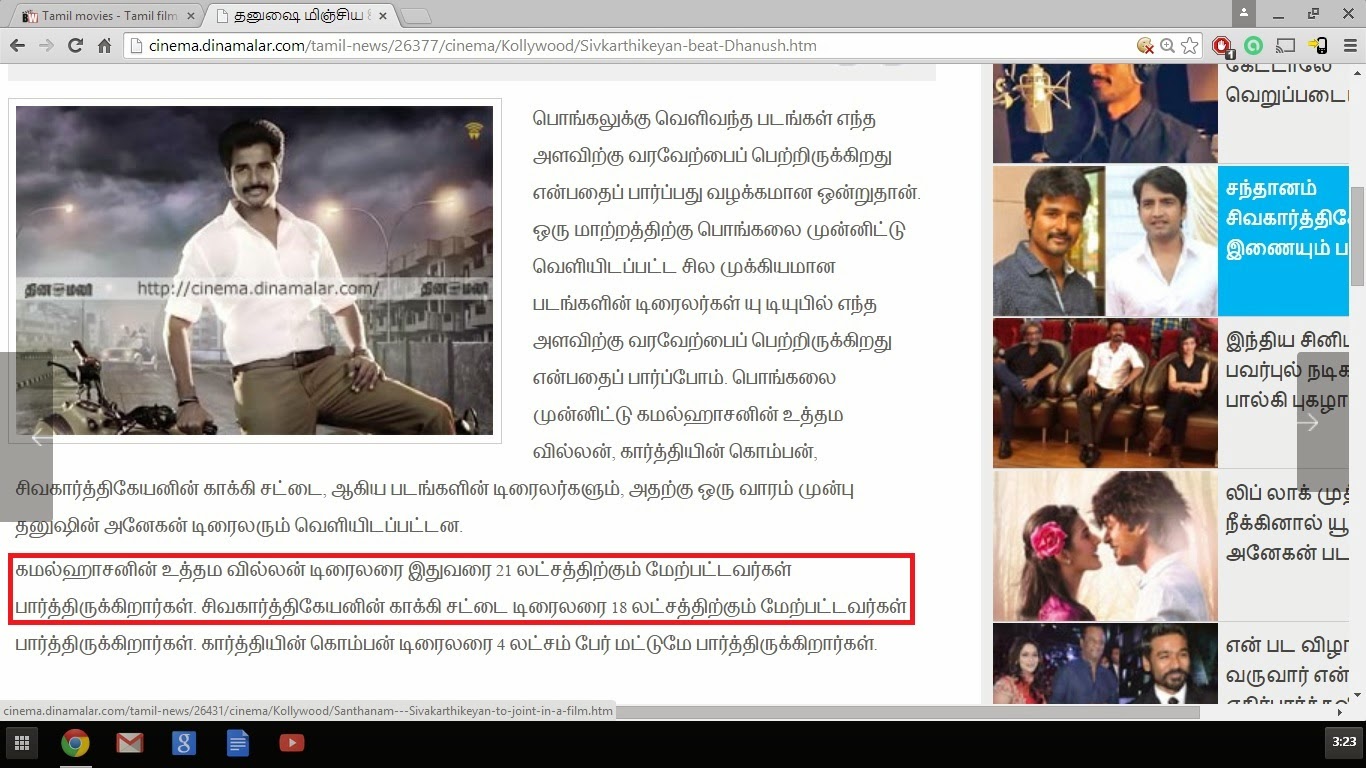 This is just not one incident of fake news.Here are a few others.
During vishwaroopam there was the fake news of comic proportions that Barry Osborne the hollywood producer of lord of rings was awe struck by kamal and he saw the movie 3 times :).Kamal kept feeding one Bull shit story after another to successfully push vishwaroopam which had a messy  screenplay. He started releasing news that he was going to make a movie called "Moo". Then came talks of him making film of tippu sultan and that he is scouting locations in australia. Then there were talks of him reviving marudhanayagam and vamamargam.He was feeding one story after another to be in the news. so that people won’t forget him. 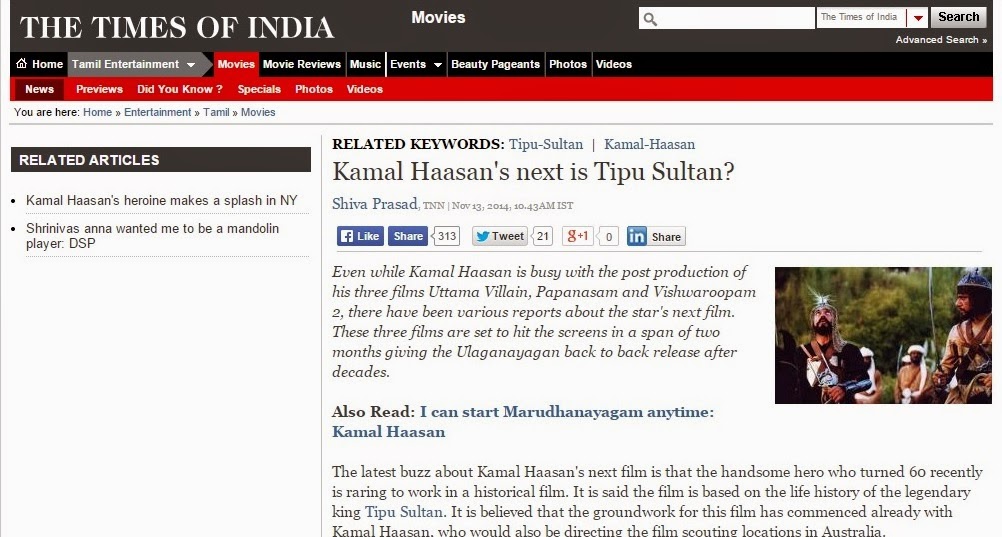 Most of kamal’s news items are either fake news or a news item that relates kamal to another news item.Like this one when the ebola epidemic broke out. Another comedy of epic proportions.
"Kamal Haasan has warned about Ebola six years ago in his movie Dasavatharam. Is Kamal a Prophet?"

Dustin hoffman's outbreak and a bunch of other movies have come out since the 1970's about ebola and other disease breakout. Guess hoffman and others are also prophets then.

I just can't digest the fact that kamal's PRO team thinks that this generation is that stupid. Kamal a prophet as news?.What these guys don’t understand is. This is not the pre internet era where kamal can watch hollywood movies from his private video tape collection and make a copy tamil movie and take credit for it. Those days are gone. His entire image was built on lies and he simply seems to be continuing it.

Even if we have to give the credit for using ebola shouldn’t it go to the director k.s.ravikumar. why are they pointing to kamal. Off course he paid for the news.But when they questioned kamal on Thenali being a copy of "what about bob?" he said they should ask that question to K.S.Ravikumar as he was the director of the movie.If that is the case then Ravikumar should get the credit for dasavatharam also correct. This explains why kamal uses dummy directors for some of his movies. He uses other directors to make movies that has stories that are copied , plagiarized. The dummy directors are fall guy in case something bombs.If at all if he goes to hollywood nobody should sue him you see.But unofficially takes credit for everything. No wonder most of the lift off movies where taken by singeetham srinivasa rao, santhana bharathi and other namesake directors. Given the fact that uttama villain is directed by ramesh aravind. You can be 100% sure this movie is copied from some foreign movie.