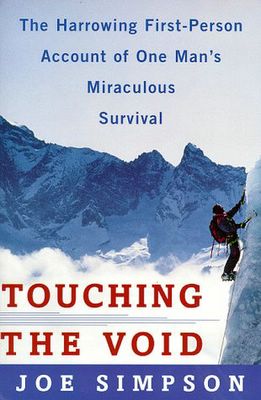 It is dark,you cannot see anything below you, but you know you are hanging at an height of 10,000 ft. Your leg is already broken from a fall, it is aching to the hips. you have been hanging there for a hour now.It is snowing and you are cold to the bone. You cannot go up or down on the rope, You cannot do anything, you are just waiting for your death. Your fear of death grows stronger with every passing second.To put an end to all your thoughts, suddenly the rope breaks and you go down into the abysmal darkness. You can feel the stars going out,wind rushing above.you realize you are free falling ,falling faster than your thoughts. Before you realize anything,you stop falling, you dont know what is happening, you are buried in snow,you feel time has stopped and you are suspended in mid air.White flashes are bursting in your eyes,you keep loosing and gaining consciousness, That's when you feel you are touching the void.

The above was the experience of Joe simpson , the author of Touching the void. It is his survival story on a mountaineering expedition that went wrong. I came across this book when i was looking at different books related to peru, before my trip to peru.

Joe simpson and his climbing partner Simon yates decided to climb 21,000 ft high Siula Grande.To give an idea, Everest is around 30,000 ft and the dangerous K2 is around 29,000 ft. The Siula Grande is the second highest peak in Cordillera Huayhuas (range of mountains in central Peru).Till that point(1985), few people have climbed the siula grande from the north ridge. But nobody has done it from the west face, which Joe and simon were about to attempt. 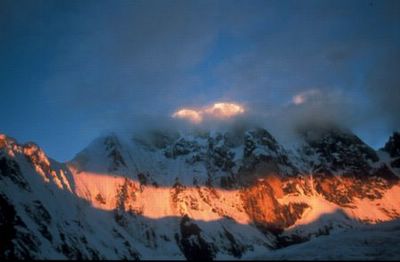 Joe and simon reach the summit after a lot of close calls. Things start's to go wrong during there descent (It seems 80% of the accident happen during the descent).Joe breaks his leg in an accident. A broken leg in mountaineering means death. Joe is afraid that simon might any minute tell him that he is going to descent alone. But simon decides to help joe and starts doing a one man rescue by bring joe down with the ropes.

At one point, they make a wrong decision to abseil when it was dark.so without knowing what is below simon lets joe down and joe is not able to find a holding at that point.It becomes a can't go up, can't go down situation. Simon who is holding the ropes at the top ,starts slipping on the powder.After holding for almost an hour.He had to make a decision. He knows that if he keeps holding the rope, he will also be dragged into a fall. So simon cuts the rope and descents alone. This decision stirred up a lot of debate when simon returned to england.

Joe miraculously survives the crash. Because of his broken leg, everything becomes difficult for him. He is not able to hop with one leg, because of the icy surface.He falls a lot and then get a crawling rhythm. The rest of the book is joe's struggles for survivle.He crawls for a few days and reaches the base camp the night before simpson was ready to vacate the base camp.

This is the jist of the story.But this is not a story , it is an experience that has to be lived in the mind.The way nature tests the climbers resolve, how they react to it is all amazing.joe does not take time to describe many of them as he describes the later part (after the crash) descriptively. For example, Joe who was descending behind simon, slips, his attempts to use his axe for hold fails and he falls, he dashes on simon who was below him and stops.He almost get's both of them killed.He becomes scared. It is almost night and it is very dark, simon says they should keep descending. Joe who just survived the crash and is shaken, shouts at simon for suggesting the idea of descending in the dark. They decide to dig a hole for there night camp. As the night falls quickly, it is getting colder every minute and they are trying to dig the hole ASAP.To add up to the miseries, simon's torch is not working .He starts repairing it with bare hands.joe who is not able to find the right spot digs a few holes which caves in.As joe is working he is little hot and is ok, but simon who is repairing the torch with bare hands is frost biten and get's annoyed seeing joe digging so many holes without any result. Joe thinks simon is behaving petulantly and ignores him. By the time the cave is dug, simon's hand are beyond repair and he is furious with joe for his lack of co-operation. This small incident is told in almost the same number of lines that i have told but when you stop and try to live those lines, you can feel another small book within those lines.

The books gives an insight into the minds of the climber and makes us take the trip with them.The very next day after the above incident, joe sees a glorious sun rise on the peak.After the near death experience, one has to tune his mind to enjoy these simplest pleasures and joe does that, he takes time to savour the sunrise. 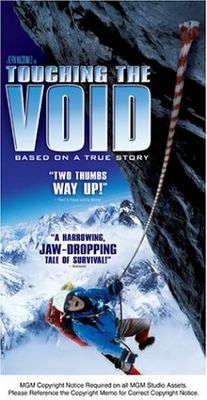 Joe narrates another incident that simon had to face when he climbed the alps,simon and his partner are closely followed by another team compraising 2 japanese guys.At a point on the ridge the japanese guys slip and they fall with a big cry.simon and his partner hear the chilling cry and see the two guys who they saw in flesh and blood a few seconds ago fall beyond there eye sight. Again here you have to imagine the fear that might have come into them, there thoughts on the purpose of the climb, there questions "is it all to fall like this somewhere else?".There thoughts on how fortunate they are to survive the crash,The way they must have summoned all there courage to carry on with the expedition. All these and more thoughts are left for the user's imagination.

you have to be concentrating every second when you are on the mountains, a small slip of concentration might lead to death. Imagine you have reached the top and you are on a ridge.Now you have to walk on the ridge. You have to be very careful cause it is narrow and slippery. For protection you and your partner tie yourself with a lengthy rope.If the person moving in front slips and falls to the left side, you have to quickly jump to the right side. Otherwise both of you will be tumbling down on the left side. Walking on the ridge ,you encounter a cloud .The passing cloud totally blinds you, you are not aware were your partner is.Now if one of the partner falls, you have to make a split decision to jump on one side. Which side is the question?.

This is a very inspiring story of one man's survival against all odds.Joe has given a very true account of what had happened, there is no unnecessary descriptions etc.He just says things as it is.You can feel and relate to his thought process, When Joe breaks his legs this is what he thinks

Simon had said nothing about what he would do and i had been nervous to prompt him.In an instant an uncross able gap had come between us and we were no longer a team working together.

It struck me we were both avoiding the issue. For over 2 hours we acted as if nothing has happened. We both knew the truth, It was very simple. I was injured and unlikely to survive. Simon could get down alone. While i waited on his actions. I felt i was holding something terrifyingly fragile and precious. If i asked simon to help, I might loose this precious thing. He might leave me.

Also in the later part of the book, where he crawls miles and miles with a broken leg. All that he does during that time is talk to himself. His inner strength and resolve is amazing. 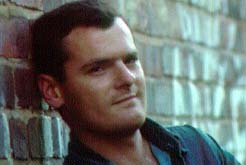 Joe gives a true account of the whole incident. Whether it is the fears that he faced or supporting simon's decision or telling about how he peed in his pants, everything comes straight from his heart.Joe after lot of medical attention resumed climbing. No one before or after these two climbers, have conquered the western face Siula Grande.

Comments:
Joe must be an amazing guy