In a sunburned country

Bryson ends the books with these lines "You see Australia is an interesting place. It truly is. And that really is, all I'm saying".You will also feel the same when u finish the book.

The book has all that you can expect from a bryson's travelogue. It is filled with humor and information. He takes us to the all the major Australian cities, desert, The great barrier reef, ulluru(ayers rock).Apart from the famous tourist destination he takes us to some off beat destinations also.like community of living Stramatalites, gippsland,cannopy walk, remote outback and fishing towns.He asks the questions that u have in mind.Why is australia so neglected by the world media?.why is the australian govt not doing much for the aborginies?.He also provides us with a lot of answers and very intresting information from his vast researches on the history,flora, fauna and the geology of the only island that is a continent and a country.

You can feel the vastness and emptiness of Australia in his words. Then again you will start liking the emptiness in the end, like his travel companion Allan.
There are numerous hilarious incidents involving allen and bill.Here is an excerpt of there interactions in a motel at a outback town called dailywaters.

Daily waters 370 miles from darwin, 570 from alice springs, was off the stuart highway a couple of miles down on a unpaved side road and on a small ford, which added to the un palpable sense of remoteness. if you are looking for a classic outback spot. you cannot improve on it.

he produced 2 keys,...
this one is a single bed he said
this one got a double bed in it, incase one of u gets lucky tonight, he bounced his eyebrows in a slightly solicitous manner

and do u think that's likely i asked

there is 80 million sheeps in outback allan, they can't all be picky


My room consisted of an ancient bed,a battered dresser and a raffier waste box, there was no tv or phone and the illumination consisted of a bare yellow bulb, the solitary window held an ancient air conditioner which shook and jittered violently when switched on but did actually seemed to generate some cool air

i went to visit allen, who was sitting on his bed
grinning inanely.come in he cried, come in
i would offer u something from the mini bar but i don’t seem to have one
pull up a chair, oh no there is no chair.well please make full use of the waste basket

It is a little baisc i conceded

BASIC !!!. it is a bloody sell
i will show u the light but it is burnt out

iam sure we can get a replacement for u i said

no no no, i think i like it better in full darkness
he pursed his lips, is it too early to start drinking??

i looked at my watch, it was only 4:45 it is a bit
there is actually something that i wanted to see

An attraction in dailywaters what can it be
someone getting petrol??, the evening sheep shagg?? Alan asked

When Bill comes across so many interesting things on the tour, lot of them unplanned, you will start feeling that austalia is indeed an interesting place.When bill goes out with one of his friend in melbourne, they come across and old man crossing the street with a chair and cartable. His friend tells him that it is jim cairns, their ex deputy prime minister.she goes on to says that he sells his autobiography on that vegetable market. Bill first thinks that she is just pulling his legs and then realizes that she is serious and asks her again."He sells books, his own book from a cartable. This was a man you understand, who not so long had the second highest office in this land....Does he do this regularly?.oh he is a fixture she said".This incident takes both the author and us by surprise. It gives us the essence of life in australia.

In 1967 the prime minister, Harold Holt, was strolling along a beach in Victoria when he plunged into the surf and vanished. No trace of the poor man was ever seen again. This seemed doubly astounding to me – first that Australia could just lose a prime minister (I mean, come on) and second that news of this had never reached me.

Here is some excerpt from the book

It happens that at 11:03 p.m. local time on May 28, 1993, seismograph needles all over the Pacific region twitched and scribbled in response to a very large-scale disturbance near a place called Banjawarn Station in the Great Victoria Desert of Western Australia. Some long-distance truckers and prospectors, virtually the only people out in that lonely expanse, reported seeing a sudden flash in the sky and hearing or feeling the boom of a mighty but far-off explosion. One reported that a can of beer had danced off the table in his tent.

The problem was that there was no obvious explanation. The seismograph traces didn't fit the profile for an earthquake or mining explosion, and anyway the blast was 170 times more powerful than the most powerful mining explosion ever recorded in Western Australia. The shock was consistent with a large meteorite strike, but the impact would have blown a crater hundreds of feet in circumference, and no such crater could be found. The upshot is that scientists puzzled over the incident for a day or two, then filed it away as an unexplained curiosity--the sort of thing that presumably happens from time to time.

Then in 1995 Aum Shinrikyo gained sudden notoriety when it released extravagant quantities of the nerve gas sarin into the Tokyo subway system, killing twelve people. In the investigations that followed, it emerged that Aum's substantial holdings included a 500,000-acre desert property in Western Australia very near the site of the mystery event. There, authorities found a laboratory of unusual sophistication and focus, and evidence that cult members had been mining uranium. It separately emerged that Aum had recruited into its ranks two nuclear engineers from the former Soviet Union. The group's avowed aim was the destruction of the world, and it appears that the event in the desert may have been a dry run for blowing up Tokyo.

You take my point, of course. This is a country that loses a prime minister and that is so vast and empty that a band of amateur enthusiasts could conceivably set off the world's first nongovernmental atomic bomb on its mainland and almost four years would pass before anyone noticed. Clearly this is a place worth getting to know. 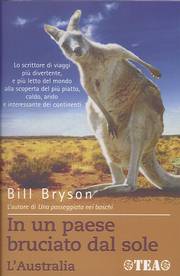 Comments:
We're not that big mate, now India? That's big, in people and stories that is. We have geographic size but we're a bit short on the amazing complexity and cultural diversity of India. Our stories are good and great but there are too few of them. I loved it in India. When I came home the place felt empty in more ways than one.

phill,
I understand the BIG u r talking about.I have toured a bit in india and i would say i havn't even seen 10% of my country.It is complex/diverse and nobody can see everything in this country.The funny thing is that,the moment i cross my state borders iam as much as a foriegner as you are.Language, culture, food, dress everything changes.