"Engaging India: Diplomacy, Democracy and the Bomb" is a book by strobe talbott the former united states deputy secretary of state. It’s his recollection of the talks United States conducted with India and pakistan after Pokaran 2.

The United states team headed by strobe and the indian team headed by jaswanth singh met fourteen times between june 98 and sep 2000.Strobe goes through all the meetings and the environment surrounding with necessary background details.Like the Narashima Rao govt's effort on testing the nuclear device and how US stopped it etc. He is not using any hard language, he is not blaming or accusing anyone, he is not praising a lot either (jaswanth being the exception), he is just describing what he felt at that time. The narration was, hmmm.. How should i put it, very DIPLOMATIC. 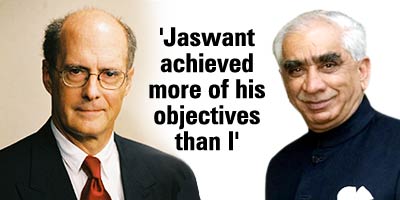 He definitely has a favorable opinion about india and high regards for jaswanth singh.He states that clearly at the start itself.

As one of the architects of the Indian strategy, Jaswant Singh came closer to achieving his objective in the dialogue than I did to achieving mine. Insofar as what follows is that story, it stands as an exception to Dean Acheson’s maxim that the author of a memorandum of conversation never comes out second best.

Apart from revelations like the famous "George fernandes strip search".The book gives lot of insight into different personalities, the strategies of different teams and diplomacy itself.

I was surprised by the congress/sonia contribution on these tasks. The US team which wanted india to sign the CTBT, thought they can can put pressure on the government through the opposition which was headed by sonia gandhi that time. Here are some excerpts on this regard

Strobe meets sonia first time after pokaran 2.She hears all his talks on india signing CTBT, but never gives him an opinion on what is congress's stand on the issue. He leaves the meeting with these thoughts

I found myself thinking about the few glimpse i'd had of her mother-in-law indira gandhi,who started it all with pokran I, back in 1974.Sonia was an altogether softer -seeming figure,But on the issue of indian bomb, they were very much in sync with each other, and with vajpayee as well.

Strobe after second meeting with sonia

Even more than in my first meeting with her six months before sonia gandhi made clear that Congress party wasn't going to allow the appearance of any daylight between itself and the BJP on the nuclear issue. Previously she had been merely diffident and evasive on the subject, this time she was steely-or, as i remarked to Dick, 'almost Indira -like'. 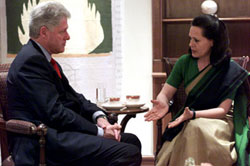 Clinton during his presidential visit meets sonia gandhi to press the CTBT issue. After the meeting clinton talks to strobe

For someone who smiles a lot and has gentlest of manners, that's one tough lady. she never said 'no' but she made mighty clear she wasn't saying 'yes' to anything that will get in the way of playing hardball with vajpayee.

A very intresting incident in the book.Strobe after being exposed to long hours of cold at the "Beating Retreat" function in New Delhi goes back to the hotel fearing he is going to be sick the next day.

Fortunately i was attended by the liveried 21 yr old personal butler named arun, who came with the VIP suite in Mayura sheraton. Dressed in his white tie, stretched collar and tie. He was quick to clean and press my own considerably less classy wardrobe.

Later as a footnote he says

About the time i left govt in early 2001,I got an email out of the blues from arun wishing me well and updating me on his career. He had made his way to california and despite the slump in silicon valley had found a job in high tech.

Like the character that comes in the movie for a few minutes, but impresses us more than the hero. Charismatic clinton impressed me in the very few pages about him.The US govt ties india signing the CTBT as a precondition for the presidential visit to India.But later when india refuses to sign the CTBT,Clinton still decides to go ahead with his presidential trip. When Strobe reminds Clinton that waiving all the preconditions that he had made would be stared down and would be devaluing american power. For that clinton says

Listen we can't be too hung up about any suggestion that someone else is pushing us around. We’re dealing with people here, who think we are the one's who have been pushing them around. They think we're always laying down the law and telling them what they have to do. Sometimes being big and powerful means recognizing that you can afford to roll with a punch. we can take the occasional bump in the road as long as we are moving along the right road.It is easier for us than anybody since we are so strong and everyone knows it.

Right before clinton's visit a group of advisors advice him not to visit pakistan as 1.Musharaff govt was not doing anything to rein Al Qeda and taliban 2.His visit there would be approving the military dictatorship of musharaff and 3.he would loose some of the ground that he gained in india if he visited pakistan on the same trip.on hearing the 3rd point clinton blews his top, and expresses his annoyance at the indians for acting as if they had a veto over where else he went in the neighborhood.

Those guys owe me something, and they've got to cut me a little slack. Iam not going to pakistan for my health,for God's sake!.Iam going to try to keep us in the play there - both for what happens inside the country and for getting them to cut out the bad stuff they're doing in the region, and that means kashmir as well as afghanistan.

The US Secret service makes a direct appeal to clinton advising him not to take the trip to pakistan because of the danger of assassination. Clinton puts his feet down and goes ahead with his pakistan trip.

Clinton who was always running late for his engagements in india, was late for his joint parliament address also. He wrote his speech with the assistance on the way from the hotel to the parliament.And was correcting the speech and adding taglines till he stepped on the dias.

As the time period covers kargil also, there is lot of information on kargil and US role in the crisis. During the kargil conflict Nawaz sherif rushes to USA ,the pakistan army which is against it doesn't provide him with an aircraft for his trip to USA. Fearing for his and his family members life, he takes a PIA plane and lands in USA with his whole family as if he is coming there for asylum.Jaswanth's prediction of a coup during kargil becomes true later.

Overall a very interesting book from an insider.

Strobe interview regarding the book on rediff

Read the first chapter of the book here

More interviews about the book