what is a tsunami?

I was wondering what is a tsunami. This is what is found out.To put in simple terms. Imagine the ripples that you used to create with the bed sheet or saree. say u are the person who is starting the ripple from one end and ur friend is holding the other end of the cloth .In a tsunami you are the seismic movement and your friend is the sea shore. Imagine the seismic movement creating a big ripple from the middle of the ocean.A ripple what is 200/300 mile long.

The seismic movement say for example caused a sudden elevation on the sea bed.It changes the equilibrium and displaces lot of water vertically. Imagine a motor cyclist coming across a speed breaker.Well in the case of a motor cyclist he goes up and the energy that displaced him looses momentum due to gravitational pull and he is back on the surface. In the case of the tsunami the waves dont looses there energy. How?? 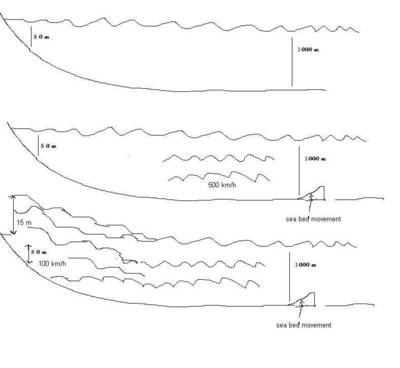 The high waves that hit the coast were not that high at the point of origin.If they would have been that high. They would have lost the energy and would have died on the way.The energy was more under the surface than over the surface. The rate at which a wave loses its energy is inversely related to its wave length(distance between two success ional waves).Longer the wave length smaller is the energy loss.

The tsunami waves looses its speed as it approaches the shore. Say it was started at a 1000m depth, the whole water mass of 1000m depth is set into motion. But by the time it reaches the shore the depth gradually reduces, slowing down the waves. But the energy that it was coming with is transformed into high waves. 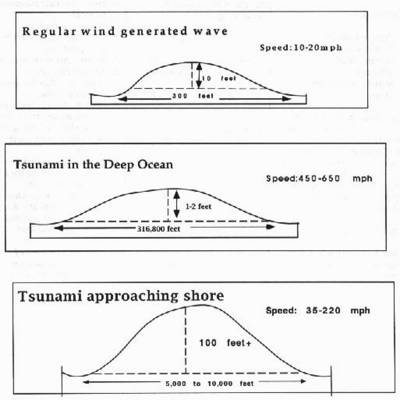 AS far the tsunami that hit south india. It originated where two plates in the Earth's crust - the India and Burma plates - collide. A 620-mile segment of the boundary snapped. Suddenly the Burma plate's margin stood at least 15 meters higher than the India Plate. With a preliminary magnitude of 8.9, the quake was the strongest anywhere in the globe in the last 40 years and perhaps the strongest ever recorded in this region. 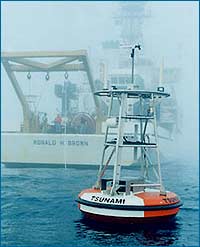 Today the killer waves hit south India causing a heavy live and property loss.The tsunami & the indonesian earthquake that tiggered it have caused has left more than 11,500 people dead according to the latest news.

A better tsunami warning could have prevented this heavy human loss.USA,japan have a tsunami warning system that closely watches the activities in the pacific ocean.japan which has the most advanced tsunami monitoring system, as they are the one who are frequently affected by it.The name tsunami itself is japanese, meaning tsu (harbor) and nami (wave).

The international warning system was started in 1965, the year after tsunamis associated with a magnitude 9.2 temblor struck Alaska in 1964.Member states include all the major Pacific rim nations in North America, Asia and South America, was well as the Pacific islands, Australia and New Zealand. It also includes France, which has sovereignty over some Pacific islands, and Russia.India and srilanka are not members.Because tsunamis dont happen than often here.Buoys have to be kept to gauge the tidal waves.And there was none in Indian Ocean.

Researchers say that aftershocks could trigger more tsunamis. The earthquake may also have created new quake zones hundreds of miles away.

Hopefully this devastation will likely to prompt calls to extend a 26-nation tsunami warning network in the Pacific.

The Light is gone

This divine voice that stirred the soul of so many music fans is no more.This is a sad day.

Five Past Midnight in Bhopal 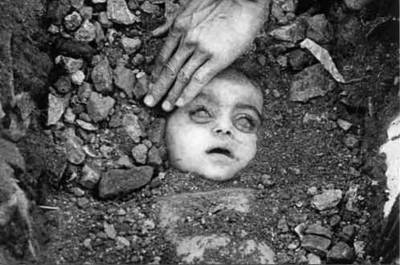 I became a big fan of Dominique Lappiere after reading "O Jerusalem" & "Freedom At Midnight”. I came to know about the magnitude and suffering of the Bhopal gas tragedy only after reading "Five Past Midnight in Bhopal". I remember a particular incident in the book, where a US judge refuses to pay a compensation equal to the compensation given to an american in such an incident. He goes on to say that a person's life is directly proportional to the GDP of the country and an indian life is not equal to that of an american as the later one's GDP is more. This was one of the many shocks that i got after reading the book.

Nearly 25,000 tons of toxic waste remains inside the factory since it stopped operations on December 4, 1984 contaminating local water and soil. Union carbide was bought over by Dow chemicals after the incident and they are washing their hands on the cleanup.

An arrest warrant was issued on Warren Anderson the then CEO of union carbide. But Anderson lives in US, without any problem what so ever.

It is so pathetic that the indian govt has not learned anything from this whole tragedy. Whether it is the compensation , cleaning or bringing Warren Anderson to justice, Indian government has screwed it big time.

"This situation calls for global norms and procedures for companies.

A universal framework should set minimum standards across national borders that would be respected wherever a company operates. It should give victims a voice even when national systems fail and governments prefer to protect investors' interests over the rights of their own citizens. The UN Human Rights Norms for Business is the most comprehensive attempt to establish such global standards and should be the basis for this framework.

The Norms charge governments with the primary obligations for the promotion and protection of human rights and set out in a single, succinct statement, a comprehensive list of the human rights responsibilities of companies.

They set an international framework that business can measure itself against and a global benchmark to measure national legislation and check whether governments are living up to their obligations.

Regrettably, some governments and business organizations are opposing these developments and trying to undermine their importance. US Judge Dodge stated in a case involving Dow chemicals that corporate accountability cannot be achieved if: "the United States allows its corporations to adhere to double standards when operating abroad and subsequently refuses to hold them accountable".

Take the message to Dow

10 amazing facts about the bhopal tragedy