Last weekend i saw this movie. One of the great movies i have seen in recent times. If you like parallel cinema , you will definitely like it. The movie cover said "india's Official entry for 1985 oscar's".This is a mahesh bhatt movie with anupam kher and H.rohini in the lead roles.Saransh's credit's at the start said "Introducing Anupam kher".It is said that anupam played the role to such an extent that after saarash , he only got grandfather, father,uncle kind of roles.

The story revolves around anupam kher who is an retired school principal Mr.B.V.pradhan and his wife parvathi is played by H.Rohini. Pradhan's son gets killed in a mugging incident in USA. He loses his interests in life and lives without any purpose, while his wife drowns her sorrow in religious activities. Paravthi's guru says her that there son's athma is looking for a womb and soon he will be reborn,very close to them.

Pradhan in order to add to his meager pension, rents his house to sujatha(soni razda) a budding actress.sujatha's boyfriend vilas is the son of local politician gajanan chithre(Nilu phule). Pradhan goes out in search of a job and gets caught in a riot.He get's mugged in a subway.Having undergone the same thing that his son might have undergone, humiliated, his helplessness drives him to an suicide attempt. But he is saved by vilas.

Paravthi says Next time she will also join him in his suicide bid.Pradhan says courage is needed for suicide and she does not have any. But parvathi says she is ready and they both decide to end there life on sujatha's bday. But right before paravthi is about to drink the poison she comes to know that sujatha is carrying vila's baby.she concludes that it is her son reborn in sujatha's womb. 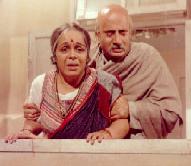 Vilas asks sujatha to abort the child,but parvathi is against it.On parvathi's insistence pradhan sees vilas father chithre and as usual he refuses for there marriage and ask's pradhan to vacate sujatha from his house. chithre's intimidation strengthens pradhan's resolve and he find's a new purpose in his life, to bring the child into the world. He feels that he didn't have the power to save his son, but he has the power to save sujatha's baby and he will do what ever it takes to do it. But he is practical and does not believe that his son is being re-born. After a lot of hardship he unites vilas and sujatha. And as soon as he unites them, he asks them to leave his house, cause he wants to fight his wife's superstitious belief.

Parvathi is heartbroken on sujatha's exit and reminds pradhan of there suicide pact , but pradhan is unwilling. He tells her that courage is needed only to live and not for dieing. One can't die for the dead and life itself cannot end and must continue.

Pradhan undergoes feelings of bereavement, helplessness, resolve and hope which are brought out beautifully by mahesh bhatt and anupam kher.The movies becomes little regular masala type in the middle for a while and then comes back to a great finale. A very powerful, moving and positive movie.Mahesh butt has to be commended for directing such a beauty with 2 old couples in the lead.A masterpiece.

I also hope you know that Anupam Kher was only 28 years old when he portrayed this role. :-)